Look, I finished something! Kid Scarf #1

Okay, so this is actually the third scarf I did for a kid’s charity, but it’s actually done and I remembered to take a picture of it! I’m proud of myself.

Like a soprano. The best player I’ve ever heard for the Theremin.

Look I Finished Something! Scarf for a Co-Worker

Yup, just look at that beauty! I actually finished a complete scarf. A very simple scarf, but it took a full skein. And it took a bit of time. Still, it came out really well. And I like the look of it. It worked up nice and soft too!

Tagged as Look I finished something!

I enjoy new interpretations of songs I love.

Look I finished something! Narnia Bookmark

Okay, so it’s not a stuffed cupcake, but I have actually finished a project.

And since I need 1) topics for blogging about to reach my 2 posts a week goal and  2) pictures, this seems a perfect fit! Maybe you’ll get more than two posts a week…

So, here is my Narnia bookmark. I glomped together a few bits from different patterns and then added the scarf at the bottom. I’m ridiculously pleased at this one. (Though, to be honest, a friend did the backing on it.) 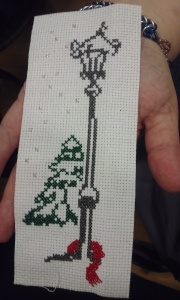 Tagged as Look I finished something!

Three months in and still, erm, limping along. I’ve got so many things which need to be listed.

Sort of slow, but the store was on vacation for a week and a half while I was on vacation. I blame it on that. Well, that and the fact that I haven’t had much new added to the listings. Time to buckle down a bit more.

The Rick & Morty Puzzle actually sold on Bonanza (which is sort of a mirror of my eBay shop, with minimal fees). I am thrilled as this is my first sale through them.

The Mad Magazine broke even after fees and shipping, which sucks, but at the same time, it’s not here and I didn’t have to pay to send it somewhere or take it to the charity shop, so there’s that.

The McDonald’s Toys were, something random from a co-worker, so I’m happy they’re headed to a more appreciative home.

The Precious Moments. Yes, there were two of the same figure. I am still selling these for a friend. More to prove to myself that I can, than anything else. Next time, I’ll just buy the things outright and move on with my life. Funny story, I told my Dad this was the boy with the ice cream cone. I also told him the title. The title is not on the box. There is no picture on the box. The box says “boy with dog”. On my notes “boy with dog” is “God Speed.” You know, because there are 4 different designs with dogs involved in this adventure.

I used to have Versace frames for my sunglasses. The frames broke. I was sad, but I sold their case, so that’s not a bad thing.

Until next month! Happy selling and buying!

Tagged as The Great Ebay Experiment

February, man, what a rush. It’s the last week already and I swear it was just beginning. I blink and *poof* it’s beyond the twentieth. February ain’t that long folks.

Pie in the Sky Goals